The Kick-off meeting of the IMAGE project

On February 19, 2018, the official start of the IMAGE project took place. Prof. Anatoliy Andrushchak, the project coordinator, called this meeting to discuss the principles of joint implementation of the project and principal aspects of the Consortium Agreement. 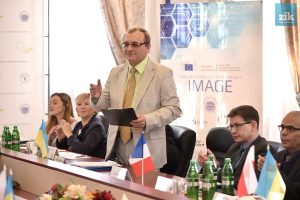 This RISE project is the first European project, where the coordinating organization is from Ukraine. Thus, besides Yuriy Bobalo, Rector of Lviv Polytechnic National University and Nataliya Chukhray, Vice-Rector of Research in Lviv Polytechnic National University, the official ceremony of IMAGE project start attended Christian Danielsson, Director General for European Neighbourhood and Enlargement Negotiations of the European Commission. 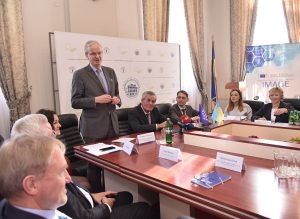 Christian Danielsson visited Lviv Polytechnic National University, where he had a meeting with the rector of the University, Professor Yuri Bobalo, and discussed the possibilities of further cooperation and EU projects implementation.

Participants from 9 universities and companies attended the meeting. Each of them had presented their area of expertise, available facilities, technical specialist, and their vision on future project implementation.